May Day 2015 in the Northern Territory 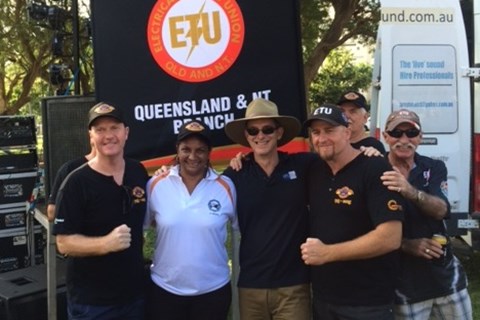 May Day 2015 in Darwin was a huge success and Hall Payne are delighted to have been the major sponsor. John Payne joined James Burke for a full weekend of activity.

2015 is the 100th birthday of the Electrical Trades Union, Northern Territory/Queensland Branch (ETU) and ETU members were out in force and headed up the march from outside 38 Wood Street (aka Union Central) to the Esplanade.

The CFMEU also had a large contingent who marched in hi-vis orange May Day shirts.

The turnout was historic and impressive, for as one long term CFMEU member said, “I remember when only two of us marched under the CFMEU banner”.

Those days are now behind the NT unionists with it being reported that over 1000 people marched in 2015.

John Payne gave a short (welcomed from a lawyer) speech to the gathered crowd at the waterfront park, and congratulated them on their fantastic turn-out for which they could be deservedly proud.

Nova Peris OAM, Senator for the Northern Territory addressed the crowd at the end of the march. She recognised the struggles of unionists and the importance of collectivism. She deplored the attacks on workers by the NT Government with its present amendments to the Workers’ Rehabilitation and Compensation Act and the Abbott government’s prospective budget that will secure even more of the country’s wealth for those who need it least at the expense of those who need it most.

The crowd was entertained by a blues band supported by Hall Payne Lawyers and a jolly time was had by all.