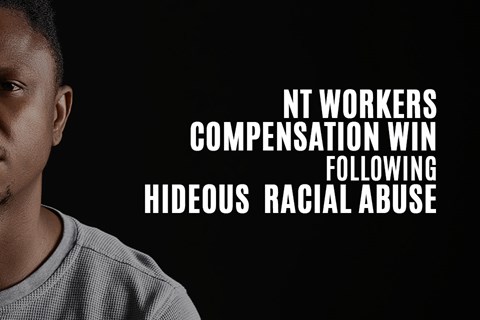 Hall Payne Lawyers recently successfully represented a First Nations worker who had suffered a serious psychological injury after being the victim of ongoing, nasty racial abuse from colleagues. A workers compensation claim was initially accepted then subsequently denied before finally being won on appeal at the Northern Territory Work Health Court.

Our client, a First Nations person, was subjected to hideous racial abuse from co-workers from his first day. This abuse included:

Our client suffered a serious psychological injury because of this abuse. He was unable to return to work.

After initially accepting his claim, the insurer ceased it after relying on one doctor’s medical opinion that his psychological injury was not caused by the abuse. The insurer also argued that they were seduced into accepting the claim because of misleading information from our client about his medical history.

We appealed the decision in a four-day trial before the Work Health Court.

The Work Health Court found in our client’s favour, that his psychological injury was caused by the abuse and that he was unable to work.

The Court rejected the insurer’s allegation that our client had been fraudulent, finding that our client’s vulnerability, limited literacy and lack of insight into his pre-injury behaviour made it difficult for him to complete forms and provide his medical history to the insurer.

The Court was unable to find that our client was suffering from a psychological injury before working at the hospital because of the lack of medical history.

This win means that our client is entitled to all his compensation benefits that had previously been cut off and most of his legal costs.

Hall Payne Lawyers was proud to successfully represent this vulnerable and deserving client who’d been the victim of hideous behaviour by his employer. The win and compensation will allow him to receive necessary medical treatment and finally move on with his life.

If you’ve had a workplace injury in the Northern Territory and you’re having difficulty:

I’ve suffered a psychological injury at work. What do I do?