Success after a rejected tourist visa allows grandparents to meet their grandson. 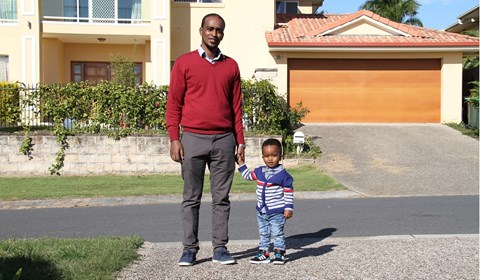 A rejected tourist visa application meant our client’s parents couldn’t come and meet their grandson. A difficult situation for all, we worked with the applicants to demonstrate that they were genuine tourists. The second time around, the Department agreed.

It started with a client’s desire to have his parents visit him in Australia and meet their daughter-in-law and two year old grandson for the first time. Sounds reasonable right?

Not when you are a Somali born UK citizen with Australian Permanent Resident status, your parents still live in Somaliland (a self declared state which is internationally recognised as an autonomous region within Somalia) and are both over 70 years of age.

Our client – we’ll call him Ibda (not his real name) – approached Hall Payne for assistance after the initial tourist visa applications for his parents were refused, with the Department of Immigration and Border Protection assessing them as “non-genuine” visitors. The decision maker took the view that these elderly parents, once here in Australia, would do anything they could to stay. This was simply not the case.

In fact, Ibda’s parents were reluctant visitors. So much so that Ibda had to “do a deal” with his father to even get him to come and visit. To get his parents here, Ibda promised his father that he would travel the Hajj with him to Mecca – meaning time off work and away from his family. Ibda agreed, willing to do whatever he needed to so he could give his son the opportunity to get to know his grandparents.

We assisted Ibda and his parents in preparing a second set of applications. These applications directed the Department to a number of factors that had been overlooked in the first decision.

Ibda’s parents owned a large herd of livestock, including camels, sheep and goats, with Ibda’s father earning his livelihood breeding and selling that livestock – not something that he would ever walk away from. Ibda’s father also had extended family in Somaliland, with significant responsibilities to his clan, and he had no desire to live out the rest of his life in a country he knows nothing about, with a language he does not speak.

To complicate the application process more, the Department did not accept Ibda’s parents’ passports as legitimate travel documents, and there were no formal birth or marriage records to support the application. Throughout this process we worked with Ibda and his parents to overcome these hurdles – and the perseverance has paid off. Ibda’s parents each have a three month entry visa, with no need to pay a security bond.

Who wouldn’t want to show off this cute little fella to their parents? Refusing to accept the Department’s original decision was clearly worth it.

Many people from various countries and age groups are classified as being “high risk”. This may well result in a refusal decision if strong supporting evidence of their incentive to depart as required is not provided. If you or anyone you know is thinking of applying for tourist visas for family or friends to come to Australia to visit, it is well worth speaking to a Registered Migration Agent about the specific criteria which will apply. Hall Payne can help. Visit our contact page or call to speak to a Registered Migration Agent today.