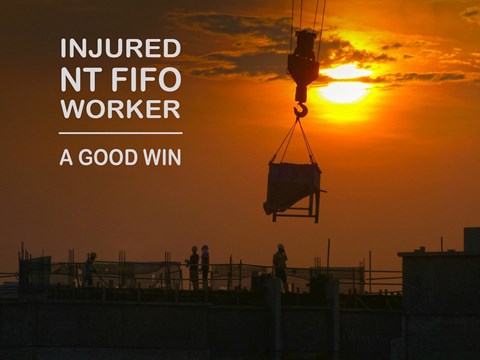 Workers compensation insurers can try and find creative reasons to reject claims, and many workers are left with no choice but to either accept an unfair decision, or navigate their way through complex and protracted workers compensation litigation.

The difficulties with the workers compensation scheme were evident in a recent case involving our client Ian.

Ian was working on a major project in the Northern Territory as a FIFO worker. He injured his knee at work and could not continue to perform his usual duties. To make matters worse, during his period of recovery, his employer made him redundant. Ian sought our advice and assistance to pursue his workers compensation and industrial entitlements.

The legal issues in dispute

Additionally, the insurer questioned Ian’s motives for lodging the workers compensation claim and they suggested that the claim was only submitted after the redundancy because he was frustrated with the employer’s decision.

The insurance company was prepared to attack Ian’s credibility.

The process of working with our client

We worked closely with Ian to help him prove his case.

We identified that there was an independent witness to the work-related incident that caused the knee injury. Further, we communicated with Ian’s doctor and found out that Ian made a report to his GP within 24 hours of the incident occurring.

We also obtained evidence from an orthopaedic surgeon who concluded that the workplace incident had caused the injury (and Ian’s symptoms were not simply the result of underlying degeneration).

We participated in a mediation of the disputed claim which involved protracted negotiations.

We were pleased to obtain a successful outcome for Ian where he received his full entitlement to workers compensation and the insurance company made complete concessions regarding the claim.

The insurer set aside the initial rejection decision and accepted the claim in full. This meant that Ian did not have to litigate his matter through the Work Health Court.

If you have been injured at work or treated unfairly and you’d like to speak with someone about your rights and entitlements, you can get in touch directly with today’s blog writer, Cameron Hall.