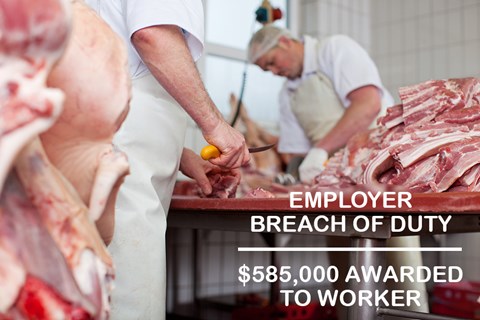 Jamie Colwell was employed by Top Cut Foods as a knife hand/butcher. On 20 January 2014, he was assaulted by a fellow worker, Parks, which caused him to sustain a psychiatric injury, post-traumatic stress disorder (“PTSD”).

Colwell had previously had interactions with Parks. He and Parks worked on adjoining stations within 2 metres of each other. Their supervisor, Hall, worked in the immediate vicinity.

Colwell described Parks as a very intimidating person, keen to portray himself as violent and aggressive. This was not entirely accepted by his Honour Judge Kent QC DCJ. However, it was accepted that Parks had a history of physical and verbal violence, including:

The claim – breach of employer’s duty of care

Colwell argued that Top Cut Foods breached its duty of care to him by failing to provide a safe place of work. He alleged that they failed to address the threat Parks presented to him, despite having adequate warning.

Colwell argued that Top Cut Foods had been warned that Parks conduct posed a risk to him on four separate occasions:

Colwell complained to Hall that he had witnessed Parks crying and shaking over his work station. Colwell stated that he was concerned about the Parks’ mental state, referring to him as a “ticking time bomb”.

His Honour did not accept the entirety of Colwell’s evidence, however did accept that Colwell had advised Hall of some concern he had with Parks at that time.

Parks gave evidence that Colwell has annoyed him on at least one occasion prior to the incident. He was annoyed by Colwell’s poor attitude towards Top Cut Foods.

He advised Hall that he wanted to be moved away from Colwell as he was “close to losing it” with him. His Honour accepted Parks’ account.

During his shift, Parks was very agitated and aggressive. He was verbally threatening violence to an unspecified individual, when Colwell (who was concerned it was directed at him) said “it isn’t me, is it?”. Parks responded “you’re not a black c**t are you?!”

Parks attempted to apologise for the incident giving rise to the Third Warning. Colwell told him to “Shut up, I’m not into your s**t”, which provoked Parks, who began to verbally abuse him.

Hall saw this and told both of them to go to the office. On the way to the office, Parks punched Colwell in the head multiple times and also punched a co-worker who attempted to separate them. Parks was dismissed that day. He also pleaded guilty to assault.

Also in issue was whether Top Cut Foods was aware of Parks’ criminal history (specifically, the GBH/assault offences).

His Honour held they were aware, although accepted that Parks did not advise of this (or his other employment issues) prior to his employment. However, at his interview, the HR Manager asked Parks if “he had changed”.

The HR Manager was also held to have made jokes to Parks similar to “have you killed/bashed anyone yet?” Further, Hall stated in evidence that he was aware that Parks had been in prison. This, his Honour held, demonstrated that Top Cut Foods knew, although not in detail, of Parks history.

Colwell submitted that, given the above, Top Cut Foods breached their duty of care by failing to separate Parks and himself before 17 January 2014.

Colwell further submitted that the risk of Parks assaulting him was reasonably foreseeable.

Top Cut Foods’ submissions were largely disputing facts, arguing that Parks’ assault was inexplicable; the First, Second, Third and Fourth Warnings were insufficient to make them believe that there was a risk that Colwell would be assaulted.

The applicable law was largely uncontroversial. However, Top Cut Foods argued that mere proof that there should have been an appreciation that Colwell was annoyed or distressed by Parks’ conduct is not, in and of itself, sufficient to establish liability.

However, his Honour held that the facts go further than “annoyance”; Colwell and Parks had both requested to be separated from each other.

Based on the above factual findings, the Judge held that the circumstances did give rise to a duty to take reasonable steps to avoid the foreseeable risk of violence by Parks towards Colwell.

“…these are not findings made with the benefit of hindsight, rather the circumstances and events prior to the assault were sufficient to put [Top Cut Foods] on notice of the risk that [Parks] presented. This arose through the state of knowledge in particular of [Hall], given the warning events which had occurred. The remedial action to avoid the risk was simple and inexpensive, thus failing to act was a breach of duty and damage followed.”

Colwell was awarded almost $585,000 in damages as a result of this workplace assault and the breach of duty by Top Cut Foods.

You can read the full court judgement here.

If you require advice or assistance in relation to workplace issues, feel free to get in touch directly with today’s blog writer, Solicitor in Workers Compensation, Jessica Hodge.