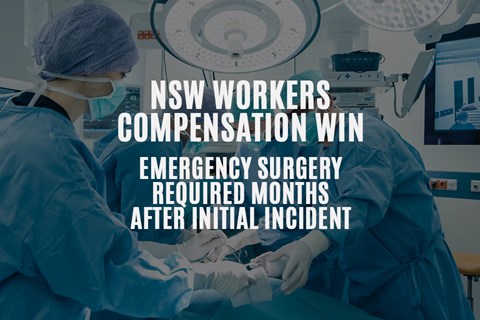 Hall Payne Lawyers recently represented a transport driver who was involved in a workplace accident when he braked his vehicle suddenly for an errant pedestrian. The sudden braking resulted in a seemingly minor injury. The worker suffered some shock and what he thought was a muscular injury to the shoulder. He had a short time off work and went back to working as normal. The worker did not make a workers compensation claim at this time.

The worker had some niggling symptoms initially but no major issues. Approximately 6-7 months after the accident, while on holidays at the beach, he suffered a debilitating neck condition which required emergency surgery and could have resulted in paralysis without immediate attention. He was unable to return to driving and lost his job.

On medical advice he sought to claim the injury was the result of the original near collision with the pedestrian and should be covered by workers compensation.

Predictably, the claim was declined and the insurer attempted to blame the injury as being non-work related due to:

They also purported to hold CCTV footage which they interpreted as showing the braking was mild and could not have caused the underlying cervical spine injury.

Hall Payne appeals the decision to deny the claim

We obtained expert medical evidence from the treating doctors and independent doctors.

The medical experts proved the CCTV footage reflected that the mechanics of the accident were causative of damage to the cervical spine. Further, this initial damage deteriorated to the point of the emergency surgery months after the injury.

We sought the assistance of an esteemed counsel to represent our client in the proceedings in the NSW Workers Compensation Commission.

Our counsel argued that the injury did not arise out of a ‘disease process’ (which the insurer put forward to limit its liability for payments), but rather was due to a sudden physiological change which originated on the day of the near collision.

Under the Workers Compensation Act, the definition of injury:

A rather complex argument was put forward by Hall Payne and counsel to distinguish the injury from a disease process, and full liability for the injury was made out on the basis of our medical evidence.

The Arbitrator found that the incident that occurred in June 2018 was a substantial contributing factor to the spinal injuries sustained by the worker. The Arbitrator agreed with our arguments that the injury was not a disease injury.

This case serves as a reminder that there is an important distinction between a personal injury and a disease injury, as defined in the Workers Compensation Act.

Even though an injury may have been ‘superimposed’ on as a result of degenerative changes, this does not of itself cause the injury to be classified as a disease injury.

Being able to differentiate between the two can be an important factor in determining whether an employer is liable to pay compensation due to the differing tests for both.

You can read the full decision of Gorrell v Secretary, Department of Transport here.

Get help from our dedicated, compassionate and expert workers compensation team

She is assisted by Craig Joshua, a bright, hardworking and talented lawyer and Alexandra Rogers, a highly experienced and supportive paralegal. You will find that Hall Payne will put in whatever work is needed to get your claim in the strongest position possible.

For advice and assistance with your NSW workers compensation claim, contact our Sydney team today on 02 8280 4100.