How to claim workers compensation in NSW 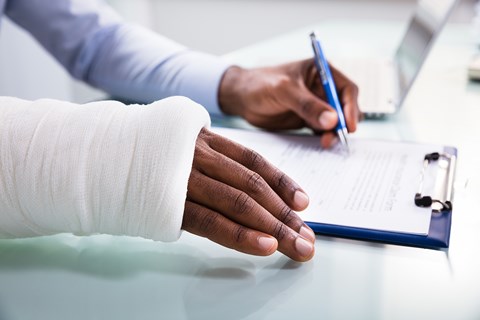 In 2012, the NSW Government passed several amendments to the Workers Compensation Act 1987 (“the Act”). Since then, several amendments to the Act and accompanying regulations along with a number of court decisions, now make up the law covering an injured worker’s entitlement to workers compensation. In this article at what constitutes a workplace injury and how to make a workers compensation claim.

We’ve looked in more detail at some of the rights of injured workers in NSW, in these other blogs:

Firstly, it’s important to note that the below content does not always apply to:

What constitutes a workplace injury?

In the first instance, eligibility for claiming workers compensation in NSW requires that the injured worker has sustained an ‘injury arising out of or in the course of employment’. This injury includes any ‘disease injury’ which includes a:

Compensation is payable whether the injury occurred ‘at or away’ from the worker's place of employment, including in some instances where an injured worker is travelling to or from work and home. In these circumstances, entitlement to compensation is assessed on a case by case basis.

Generally, compensation will only be payable where there is a real and substantial connection between the injured worker’s employment and the accident or incident which resulted in the injury.

How to make a claim for workers compensation in NSW

An injured worker should notify their employer of an injury as soon as possible after the injury or after diagnosis of any illness or disease. The employer has an obligation to record any workplace injury or work-related disease in the register of injuries and notify their current insurer.

How long do I have to lodge a claim?

Often the reporting of injuries does not occur immediately, depending on the circumstances of the injury. Although there are exceptions, the recommended timeframe to lodge a claim for workers compensation is within 6 months of sustaining a workplace injury.

If a workers compensation matter ends up in the court system, an Arbitrator will consider all ‘contemporaneous medical evidence’ supporting a workplace injury. So, if an injured worker is unsure as to whether or not the injury is ‘work related’ or generally unsure as to whether they can or should pursue workers compensation rights, it’s advisable that they record their workplace injury related medical condition to their general practitioner or specialist.

We strongly recommend injured workers also seek legal advice from a lawyer experienced in workers compensation, at their earliest opportunity. This will ensure they receive all benefits they are entitled to.

How do I report my workplace injury?

Injured workers can now report their injury through a central system managed by ICARE:

Reporting workplace injuries through the central ICARE system will preserve an injured workers rights to workers compensation, as a claim number will be issued for future reference.

Do I have to provide medical certificates for my workers compensation claim?

If your injury appears minor, it is still important to notify ICARE

It is crucial that workers report any workplace injury to ICARE even where injuries appear to be minor.  This is because an injured worker has a right to claim workers compensation for aggravations of the injury until their pension age, which in most cases spans between the ages of 65 and 67 years old.

How long does it take to make a decision on my claim?

The insurer has an obligation to process a claim for workers compensation and decide if they will accept liability or not, within a very specific timeframe; usually a maximum of 2 months.

It is common practice for workplace injury claims to be accepted on a ‘provisional liability’ basis. This means the claim is accepted for an initial period of 12 weeks and weekly payments will commence immediately. During the 12 week period, the insurer investigates the validity of the claim prior to making a final determination.

What is my entitlement to weekly payments (wages) and medical expenses?

If a claim is accepted, weekly benefits are paid in accordance with a formula called “PIAWE” which stands for Pre-Injury Average Weekly Earnings.

The entitlement to weekly compensation very much hinges on an injured worker’s capacity to work in accordance with the supporting medical evidence as well as their assessment of permanent impairment.

There are situations which allow an injured worker to claim an extended right to weekly entitlements and/or medical expenses beyond their entitlement period. If they can demonstrate that they have not reached a period of stability (i.e. maximum medical improvement “MMI”), they may remain on weekly benefits; for example, where extensive treatment or future surgery is indicated by a medical professional.

What medical treatment and expenses am I entitled to?

The entitlement to a reimbursement for medical expenses is closely correlated to the right to weekly compensation. The general rule that dictates whether medical treatment will be funded by an insurer is whether the treatment is ‘reasonable and necessary’. However, there is an array of exceptions to these rules; for example, those who require surgery or who can demonstrate a condition which is not yet stable.

What if my workers compensation claim is rejected?

If a claim is declined, then the insurer is obliged to issue a ‘Section 78 notice’ together with all supporting evidence for rejected the claim.  These notices can be reviewed and/or disputed in the Personal Injury Commission. To review or dispute a workers compensation decision, you must have legal representation.

The Independent Review Office (“WIRO”) assists injured workers with their complaints about insurers and their conduct and resolves those complaints where possible, within 7 working days.

The WIRO can be contacted on their website ‘www.wiro.nsw.gov.au’ or on their hotline 13 94 76.

An approved legal service provider (“ALSP”) may obtain a legal grant of funding for an injured worker to fund all their professional fees payable to a lawyer or barrister, as well as all disbursements incurred in the running of a worker’s compensation matter. As such, access to justice is available to injured workers in NSW who have sustained an injury and want to challenge a decision of an insurer.

If you require assistance with a worker’s compensation matter, please contact the workers compensation team at Hall Payne Lawyers for a complimentary assessment of your entitlements. We can also apply for legal funding on your behalf, from IRO.

Get in touch with today's blog writer:
Baiba Thomas

Other blog posts by Baiba...