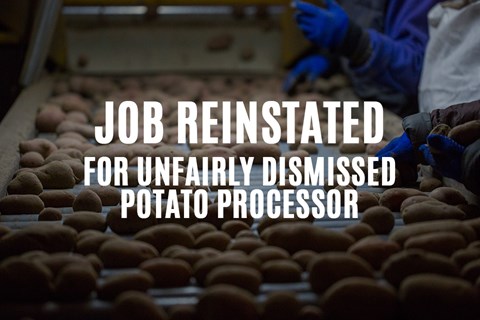 A recent decision of the Full Bench of the Fair Work Commission has quashed a compensation order in an unfair dismissal matter and held reinstatement to be the appropriate remedy. Ultimately, the Full Bench found that the employer failed to demonstrate a loss of trust and confidence in the employment relationship.

Background to the unfair dismissal claim

In the case of Wally Moszko v Simplot Australia Pty Ltd (‘Moszko’), Mr Moszko worked for Simplot as a potato processing plant shift feeder. In November 2020, Simplot terminated his employment on account of allegations he had failed to perform bunker drains across two workdays and falsified a log sheet.

At first instance, Commissioner Harper-Greenwell found that Mr Moszko was part of a team with shared responsibility for the relevant duties, and the failure to perform duties could not conclusively be attributed to him. The Commissioner consequently held that none of the allegations could be substantiated and that Mr Moszko’s dismissal was harsh, unjust and unreasonable.

Although Mr Moszko sought reinstatement to his position with Simplot, the Commissioner held that reinstatement was inappropriate because Simplot’s trust and confidence in Mr Moszko had been damaged by:

The Commissioner considered that if Mr Moszko was reinstated, his work was likely to be closely scrutinised by Simplot and subject to further investigation. As such, the Commissioner held that there were low prospects of a healthy working relationship being re-established between Mr Moszko and Simplot.

In place of reinstatement, the Commissioner ordered Simplot to pay compensation of $9,200 plus superannuation to Mr Moszko.

The Fair Work Commission’s decision was appealed by Mr Moszko.

On 10 November 2021, a Full Bench of the Fair Work Commission quashed Commissioner Harper-Greenwell’s decision and ordered that Mr Moszko be reinstated to his position at Simplot with back-pay and continuity of service.

In reaching their decision, the Full Bench endorsed Nguyen v Vietnamese Community in Australia (‘Nguyen’), which stated that reinstatement is inappropriate where:

Nguyen also considered the concept of ‘loss of trust and confidence’, and stated that:

In Moszko, the Full Bench held that reinstatement was the appropriate remedy as a sufficient level of trust and confidence could be restored to make the employment relationship viable and productive.

In reaching this conclusion, the Full Bench considered the unresolved bunker drain issues and noted that:

In considering the additional, unrelated allegations of workplace misconduct against Mr Moszko which arose during the proceedings, the Full Bench noted:

In determining that reinstatement was appropriate in all of the circumstances, the Full Bench also considered the following factors:

Lesson for those seeking reinstatement after a successful unfair dismissal claim

The question of whether reinstatement is an appropriate remedy will depend on whether a sufficient level of trust and confidence can be restored to make the relationship between employee and employer viable and productive. This can be a complicated question and it is consequently, important to seek legal advice about any potential claim.

If you’ve been dismissed and think it’s unfair, unjust or unreasonable, there are a strict time limits for lodging a claim. Contact one of our employment lawyers to ensure your rights and entitlements are protected.