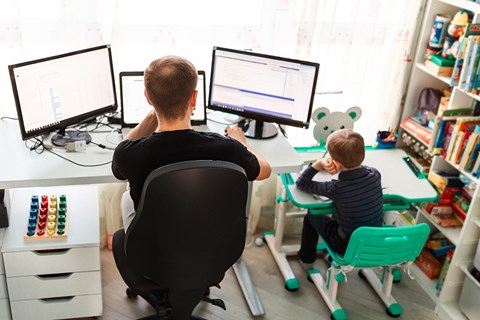 One of the biggest surprises that has emerged as a result of the COVID-19 pandemic is the ability for a large number of workers to productively work from home (or WFH as it has come to be known). With WFH options continuing for many workers even after the pandemic, this poses the question, “What are my workers compensation entitlements if injured while working from home?”

In this blog, we outline how the current laws would operate in hypothetical situations where a worker may get injured while working from home. While we provide this as general advice; cases are always assessed on a case-by-case basis. It’s important to obtain legal advice about your specific circumstances, from a lawyer experienced in NSW workers compensation claims.

General requirements to be eligible for worker’s compensation in NSW

For any worker’s compensation claim to be successful in NSW, the injury needs to arise out of the course of employment and the worker’s employment needs to be a substantial contributing factor to their injury.

Under this section, the employer/insurer has a defence where compensation is not payable if the worker was subjecting themselves to an abnormal risk of injury.

Is the home a ‘place of employment’?

The issue of whether the home falls within the ‘place of employment’ definition has not yet been considered.

However, it is accepted that a worker’s course of employment can extend beyond a worker’s normal hours and normal place of work. The intention of section 11 of the WC Act is to cover injuries sustained during a break in work taken for the purposes of ‘refreshment or relaxation’. The concept of an ‘ordinary recess’ would also be limited to a relatively brief interruption to work.

This situation would be reasonably clear and would likely fall under an ‘ordinary recess’ injury as the worker is entitled to lunch breaks and it is for the purpose of ‘refreshment or relaxation.’

It is therefore likely that this will be a successful claim for a worker under section 11 of the WC Act. It is unlikely that an employer could rely on the defence provided under this section as preparing lunch with a knife would likely not be considered voluntarily subjecting themselves to an abnormal risk of injury.

The worker would need to show that this ordinary recess was taken for the purposes of refreshment and relaxation. It would be highly unlikely that hanging washing would fall under this purpose.

Worker’s child runs into them and causes injury

In this situation, the consideration would be whether the worker’s employment is a substantial contributing factor to their injury.

It would be highly unlikely that this claim would be successful as there does not seem to be a connection with the work the employee was doing and the injury. There may be potential for a compensation claim if the employer has allowed a worker to work from home in order to care for their children, however, this has not been explored yet.

Worker choosing to work outside usual hours and hurts their neck

The issue here is whether the injury happened during the course of employment. If there is an agreement in place that the employee can do their work outside usual hours, this will be easily satisfied and liability will very likely be accepted.

Further, if the worker could show that they had previously commenced their duties outside their usual hours, this would again likely be satisfactory for a claim to be accepted. It is generally accepted that the course of employment can extend beyond the worker’s normal hours if the worker was engaged in work-related duties.

The worker's compensation scheme is a no-fault system. In this situation, it means that even if the employee wasn’t following procedure and they get injured, it is likely that the insurer would still be liable.

The defence that may be available to the employer/insurer is that the worker’s injury was solely attributable to the serious and wilful misconduct of the worker (Section 14(2) of the WC Act).

Cases will often never be exactly the same and the facts of each case will need to be individually assessed in order to determine any worker’s compensation rights and entitlements. While these scenarios may seem highly unlikely to occur, with the number of employees now working from home, claims of this nature may slowly start emerging.

If you’ve been injured at work or while working from home and you’re unsure if the circumstances of your injury will be covered by worker’s compensation, contact us for advice and assistance. Our team of lawyers are IRO approved lawyers which means that there are no legal costs payable by the worker from start to finish, for any workers compensation claims.