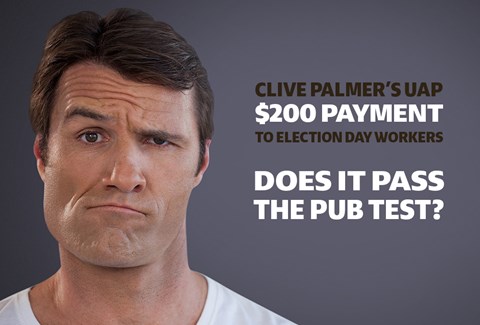 Both the Guardian and Adelaide’s InDaily online newspapers carry reports that Clive Palmer’s United Australia Party (UAP) is offering people $200.00 to hand out how to vote cards at the May 2019 election this Saturday in a number of Adelaide seats.

Palmers UAP campaign has been dogged by stories about workers at Palmer’s Townsville nickel refinery not receiving entitlement payments following its collapse. There is a real risk that the reported election day deal offered for campaign workers may get UAP into hot water and create a nasty political tangle, in an election where wages are central, for a UAP campaign already struggling to avoid talking about Townsville nickel workers.

What is the election day offer from Clive Palmer?

The reports state that a Facebook post by Port Adelaide Enfield Councillor Mark Basham, is looking for workers to hand out how to vote cards on Saturday. The workers are to be paid $200.00 for working from 7:30 am to 6:00 pm with a half-hour break.  This amounts to 10 hours of work for $200.00.

But is the offer lawful? Arguably, no.

Are the ‘workers’ engaged as casual employees or contractors?

The offer made by Clive Palmer’s UAP looks, for all intents and purposes to be an offer of casual employment. If so, UAP has big problems. Given the workers are not running their own business, only supplying their labour, wearing UAP uniforms, must work as directed by UAP, don’t need to provide any tools to do the work, and given the low pay and having no ability to subcontract or delegate, it is highly unlikely they would be legally considered to be contractors.

We reckon Clive needs to get UAP to have another look at these offers and make sure it’s not unintentionally ripping off election day workers. If he doesn’t dot all his “I’s” and cross his t’s”, and the workers are considered casual employees, UAP may be up for thousands in unpaid wages for the work done on election day.

Should you have any concerns in respect of whether you're receiving your correct entitlements and wages, contact our experts for advice or get in touch with today’s blog writer, Principal in Employment & Industrial Relations law, Luke Forsyth.