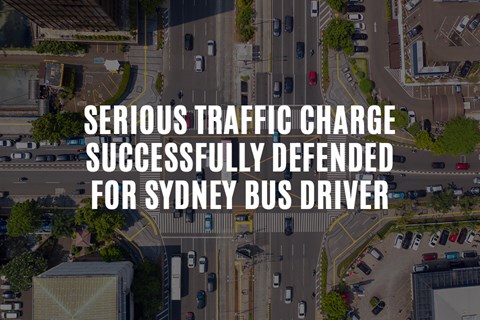 The Court imposed a Conditional Release Order (CRO) with conviction and the minimum 12-month licence suspension.

A Conditional Release Order (which may be made with or without a conviction), is a community-based sentence for the lowest level of offending. They replace the former sentencing option of a good behaviour bond. For the term of the CRO, an offender must not commit any offence and must appear before the Court if called on to do so at any time.

In 2020, the RTBU member, whilst operating a STA bus in Sydney, stopped at an intersection and on a green light turned right across two lanes of oncoming traffic. As the RTBU member executed the right-hand turn, an oncoming scooter rider collided with the bus. The scooter rider was seriously injured in the accident and taken to hospital.

Police were called to the scene of the accident and arrested the RTBU member for the purposes of undertaking mandatory drug and alcohol testing.

Driver’s criminal charges upgraded after death of the scooter rider

Dangerous driving occasioning death is an indictable offence (that is, a serious criminal offence). The Department of Public Prosecutions (DPP) and the defendant (the driver) are required to go through a process of charge certification and case conferencing prior to sentencing (or hearing) for an indictable offence.

Initially, Hall Payne made representations to the DPP that they withdraw both charges. This was on the basis that the facts did not support a finding that our client’s driving was dangerous or in fact negligent and there were no reasonable prospects of conviction for either charge.

The DPP’s evidence, including most notably the CCTV footage, showed that our client checked his mirrors and looked for oncoming traffic. He simply did not see the oncoming scooter rider.

Furthermore, we commissioned expert evidence which showed that at the time of the collision, the scooter rider was travelling at 25km/h above the speed limit whilst our client was turning his bus at a cautious 7km/h.

Although the DPP refused to withdraw both charges through the case conferencing process, they did agree to drop the dangerous driving charge in exchange for our client agreeing to plead guilty to the negligent driving charge for sentence in the local Court.

Negligent driving occasioning death has a maximum penalty of 18 months imprisonment and a fine of $3,300.

Defence strategy at the sentencing hearing

To carry out this strategy, we ensured that the member had completed the traffic offender’s intervention program and had obtained persuasive references from his supervisor, colleagues and medical professionals detailing his good character and the devastating impact of the collision and subsequent criminal proceedings, on our client.

We relied on the following circumstances:

The DPP sought the imposition of a Community Corrections Order (CCO) commonly known as a community service order. A CCO is a more serious penalty than a CRO (referenced earlier in this article) and requires the offender to comply with standard conditions.

The sentencing Magistrate also has discretion to order a number of other conditions aimed at reducing the risk of re-offending, such as:

The Court’s decision to impose a Conditional Release Order

Whilst the Court found that our client was of impeccable character and had shown immense remorse since the accident, the Court decided that given the loss of life the sentencing principles required the Court to impose a penalty on the RTBU member.

Accordingly, the Court imposed a CRO (as opposed to the more serious penalty of a CCO), with conviction and a 12 month licence suspension.

In tragic circumstances, Hall Payne Lawyers and our client, with the support of his Union, the RTBU, developed and executed a strategy to obtain him a favourable outcome.

This case demonstrates the importance of:

Anyone can make a mistake with tragic and unforeseen outcomes.

When seeking to defend a traffic charge or have it dismissed, a considered legal strategy is required to ensure the Court is persuaded to impose an appropriate outcome.