Fighting at work can lead to disciplinary action, including termination 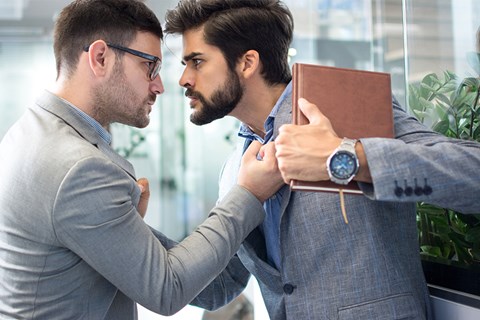 A worker involved in a physical altercation in the workplace can face serious disciplinary consequences, including the immediate termination of their employment.

Fighting is classified as “serious misconduct” under the Fair Work Regulation. The effect of this is that if your employer sacks you for serious misconduct, they do not have to pay you notice and can terminate you with immediate effect. You may also miss out on long service leave entitlements in some cases.

What if the fight wasn’t your fault or you were defending yourself?

What does the law say?

The Fair Work Regulations define serious misconduct to include:

However, in considering a termination following an allegation of fighting at work, the Commission will have regard to a range of factors, including:

A number of cases stress the importance of providing procedural fairness toward workers when dealing with allegations of fighting at work.

In the case of Dewson v Boom Logistics, an employer made a finding that an employee had been involved in a fight at a Christmas party, headbutting another employee.

While considering whether the worker had been unfairly dismissed, the Commission concluded that the employee had committed serious misconduct, but found that a number of procedural deficiencies rendered the termination unfair.

They considered factors, including:

The above factors rendered the decision unfair.

A finding of self-defence may be a crucial consideration where an allegation of fighting at work is substantiated.

In the case of Fearnley v Tenix Defence Systems, the employer terminated the employment of Mr Fearnley on the basis that he breached a workplace prohibition on fighting. Fearnley gave evidence that he was attacked by another employee, and that he was “fighting for his life”. The Australian Industrial Relations Commission found that Fearnley’s dismissal was unfair. In ordering his reinstatement, Williams SDP found that:

“In general, fighting at the workplace is unacceptable. Involuntary involvement in a fight or involvement for the purposes of self defence may well be reasonable”

The decision in favour of Fearnley, including the decision to reinstate, was subsequently upheld on appeal.

Other factors may play a role where an allegation of fighting at work is substantiated.

The case of New South Wales Fire Brigade Employees' Union (on behalf of Brenden O'Donnell) and Fire & Rescue NSW, the Commission dealt with a worker who had been terminated following an assault at the workplace. The worker had admitted to the assault, but subsequently presented evidence of a work-related diagnosis of post-traumatic stress disorder.

While suggesting such a factor could be considered as mitigating, Tabba C ultimately found that the failure to raise the PTSD diagnosis as a mitigating factor prior to termination, meant that it could not be relied upon and found that the termination was justified.

This question was further considered by the NSW Industrial Relations Commission in the case of Sheridan v Health Secretary Illawarra Shoalhaven Local Health District. In that case, Sheridan retaliated after being assaulted with a blow to the head by another employee. Sheridan submitted that his actions were brought about either by the effects of post-concussion syndrome following a blow to the head, or by an underlying psychological condition.

However, Sloan C rejected both arguments, finding that neither of these factors brought about Sheridan’s actions. The Commissioner found that the dismissal was not harsh, unjust or unreasonable.

Notwithstanding the above, the case of DP World Sydney Limited v Mr Stephen Lambley demonstrates the challenges faced by employees contesting terminations for workplace fighting. In that case, Lambley was accused of fighting with another employee, however, the Commission was satisfied that he had been “set up” by another employee (Mr Smith) who had initiated the encounter in order to bring about Mr Lambley’s termination.

While the termination was initially found to be unfair, the Full Bench on appeal overturned the finding, stating that:

“If Mr Smith had set up Mr Lambley to engage in this conduct in front of CCTV cameras, it does not in any way excuse Mr Lambley’s conduct or suggest that an employer cannot reasonably discipline an employee for the conduct in which they have clearly engaged. We do not consider that this possibility, even if correct, is capable of outweighing the otherwise inherent fairness of dismissing an employee for engaging in a serious assault after following a procedurally fair investigation.”

Allegations of fighting at work can have serious ramifications up to and including termination of employment. Workers facing such allegations should seek legal advice at the outset of any investigation process.

For employers, a failure to afford procedural fairness, or to properly weigh mitigating circumstances, could ultimately render a termination harsh, unjust or unreasonable, despite the otherwise serious nature of the conduct.